The Next Stage Of Language Evolution & EMOJI in Business Communication

Emojis and Emoticons are omnipresent in today’s modern generation. In these passing years, these ideograms of modern ages have been widely known as internet shorthand for emotion for everyone ranging from love or heartbreak, sad or tears of joy until flags or even an avocado.

They’re vivacious, light-hearted. Plus, a broad range of emotions can be conveyed so efficiently in a way that even words sometimes can’t. 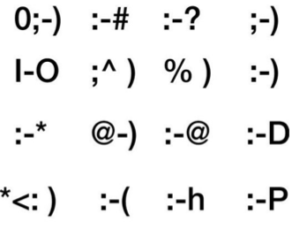 THE EVOLUTION OF EMOJI 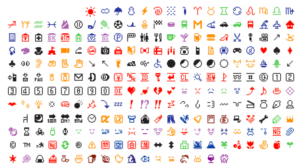 Shigetaka Kurita first created the emojis for NTT Docomo’s mobile internet platform presenting a set of 176 pixelated symbols each on 12×12 pixels in dimension which are the ancestors of the later more complicated and ever-increasing set of emoji we use today.

Kurita’s kanji and manga-inspired emojis were openly welcomed by number of Japanese mobile users. Whereas, outside of the country, users started using the ideograms slowly, owing in part to the closed, complex and competitive matrix operated by different mobile phone operators in Japan.

However, companies see the social media taking off in the U.S. as the great opportunity to expand into overseas markets, it was now! — the time for emoji to go global.

In the following years of emoji evolution, more emojis supporting gender and racial diversity were added as options. Emoji Dick was published in 2013, an all-emoji translation of Melville’s classic. A thousand of hours are spent by over 800 people working on the creation of this book.

2010 : Global tech giants like Apple, Google include emoji options on their messaging platforms

Apple’s inclusion of an emoji keyboard on the iPhone 5’s operating system in 2011 effectively turned emoji from being a weirdo Japanese thing into a real global communication tool.

2015 : Facebook’s Cooperation and Face with Tears of Joy (😂) as the word of the year

In 2015, Facebook co-opted emoji into shorthand and moreover, Face with Tears of Joy (😂) was crowned “word of the year by the Oxford English Dictionary

Not only is emoji is an expressive form of communication, helping to counter the lack of gestures and tone of voice in the written word, it’s also the fastest growing “language” of all time. Even though it is more popular among young ages, emojis also penetrate into almost every generation with an estimated 92% of internet users taking part.

Considering the 2017’s emoji pack, this year’s main themes are inclusivity and diversity, with emoji’s creators aiming to expand the scope of their pictograms to better represent the full range of people using them.

Apart from that, this year’spack finally adds a full range of skin tones to all human emojis. The basic smiley emojis have always been a deep yellow, a kind of race-neutral skin tone reserved mainly for LEGO figures and residents of Springfield, but the more realistic depictions showing jobs or activities haven’t always catered to the full range of skin tones. Thankfully that’s no longer the case with these recent changes.

The latest update also includes improvements on gender representation – when many of these emojis were first launched, they had just one version apiece and predominantly followed gender stereotypes. Men were used to showcase most of the work-based activities while women were mainly seen getting massages and haircuts. With emojis used so frequently by so many – especially young people – they ran the risk of perpetuating these stereotypes. To combat that in a positive way, alternate versions of these characters have gradually been added to show that women can be construction workers and men can be dancers.

Going a step further, the new pack also includes suggestions for a series of gender-neutral emojis without typically masculine or feminine features. This would not only please those who don’t align with the conventional binary genders, but also provide a more neutral set of emojis for all, stripped of the inherent implications and biases of gender. Sometimes you just want to portray somebody waving or shrugging or smiling or running, and it’s not important whether they’re a man or a woman. Perhaps these will form a new ‘base’ emoji going forward, with users switching to a specific gender representation if they feel it’s relevant. 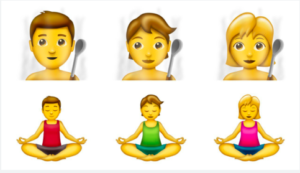 It then arouse a question that — with new, more diverse emojis coming soon, could those cute little smiley faces have a bigger cultural impact than we thought?

EMOJIS IN BUSINESS WORLD : Is it Appropriate to Use Emojis and Emoticons in Business Communication?

One question that has always been in my mind every time i write a business email aiming for a somewhat informal tone, i habitually finish my sentence with :), i typed, i deleted and repeated this for many times.

SO — in my opinion, the answer is YES in cases or times that you aim to make some impressions. Yet, you need some tips for the professional use of emojis and emoticons.

The most common problem of the written communication is that there is the space left for misinterpretation.

The famous psychologist, Albert Mehrabian claimed that only 7% of our communication is verbal. 38% is vocal (our intonation) and 55% is nonverbal (our body language).

Emojis and Emoticons are here as tools to effectively solve the problem of the lack of nonverbal in written communication. Without emojis, the written communication can suffer from the ‘negativity effect’, which happens when the message is interpreted more negatively than intended.

However, there are some limitations here. Emojis range from dumplings to airbus planes and those are friendly in private communications. Yet, in business communication, you should avoid those and stick with face-like emojis instead.

For the use of emoji in business communication, this means that you would do better to avoid the emoji that are higher in risk of being misinterpreted.

There is still a step beyond, now that some emojis and emoticons are universally positive, yet they are still being used in different expressions. Consider the wink emoji ;), some people agree that it is positive, to signal their friendliness, whereas, some use it as a way to represent their double meaning and irony.

3. Limit the number of Emojis

Packing your messages with emojis will obviously make you look unprofessional. But how many you can afford to throw in there depends primarily on your communication channel.

Emoji in email are fine, but they should be used with modesty for example, only use them at points that a sentence could be misinterpreted, and try to limit it per one email like below 1 emoji per 3 paragraphs.

However, live chat and messaging are much more accepting for emojis and emoticons than in email. That’s probably because of the informal effect of chat and real time communication.

4. Depend on who you are dealing with

In the end, whether the use of emoji is appreciated or not depends mostly on the person you’re interacting with. There are several factors regarding this issue.

All in all, to avoid misunderstandings that may occur and to be in the safest place, social mimicry should be used in the sense that — using emojis and emoticons only when your partner does so. When their tone is formal, better to exclude emoji. That also means it’s a good idea to save the use of emoji until after you’ve become more familiar with the person.